From Chamonix to St. Hilare and heading south 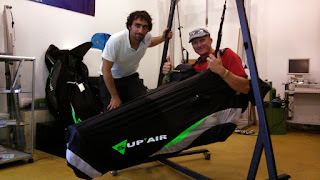 Big thunder and heavy rain woke us up in Chamonix. At least we got a good thunder concert as we could do nothing else around Mt. Blanc.
We contacted Clement and Bruno (from Supair) if we could come for a visit to Supair's headquarters in Annecy which is just an hour from Chamonix. They had time and made us feel very welcome and wanted as much as possible feedback of the new harness. In the mean time Bruno added and adjusted small bits and peaces on the harness he wanted to do anyways. I had some issues with the shoulder straps of their backpack which resulted into pain in my shoulders and Bruno knew right away what it could be and added more padding and changed what needed to be done. Wow, what a service, thanks a lot again Bruno and to your team.
Clement (manager in Sales for SupAir) is also a xAlps competitor and was very helpful to give me valuable information of the Chamonix to St. Hilare section, thanks again Clement, it all made sense wen we saw it the last couple of days. After the SupAir visit, we headed to Villard sur Doron stayed overnight and the next day we hiked up to Mount Bisanne. This site is known as a very popular XC starting point, but when we got up, it was still covered in clouds and once the clouds lifted, we had a good north wind which is from the wrong direction. After spending some time up there, we hiked down a couple minutes and launched in some week lee thermals and managed to fly down instead of hiking down 1200 meters.
After we packed up, we headed to St. Hilare and checked out the route Clement was telling us.
We planned to hike up Dent de Crolles (2062 meters) which is just above St. Hilare, but the cloud base was just about 100 meters above St. Hilare (900 meters) and we could watch the first para gliders playing in the morning sun (9:00am). After watching this for 20 minutes, we decided not to hike and start flying. My first flight was about 2 hours and I flew part of the route back to Les Marches and back to St. Hilare, top landed had some lunch, adjusted the harness a bit and got ready for another flight. Cloud base raised up to 1400 meters but it was still not enough to cross the valley to follow the xAlps route. After my 2nd attempt crossing the valley, I managed to thermal up some small bumps on the other side and could work all the small bumps and ridges to the south west passing by Grenoble. Cloud base never got higher then 1800 meters which made it impossible for me to follow my way-points which were leading me into the higher mountains (about 2500 meters). I ended up at a ridge soaring site on a high plateau by Lac Mort, top landed there and contemplated to hike about 10 km south to a open grassy mountain. Instead of hiking, I launched again and tried to fly east and to work myself out of this area, which resulted in a landing down in the valley. Overall I had a great flight and spend more then 6 hours in the air trying out different things.
Today we plan to hike up another mountain and head down south towards Monaco.
Posted by Max Fanderl at 12:47 AM