For the Paragliding Club "Bodenlosen" in Munich we will do a presentation about the 2011 race together
More details at
http://www.bodenlos.de/aktiv/2011_10_25_Xalps.php 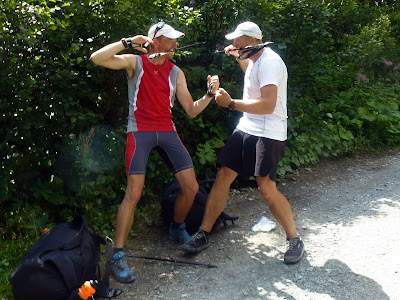 Posted by Max Fanderl at 9:43 AM No comments:

Flying over the castles and the Dolomite's Tour - part 2 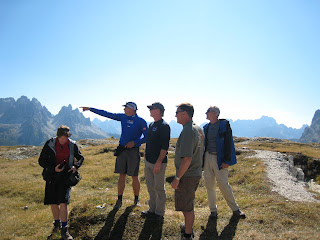 Day 6:
Intro and briefing at www.BlueSky.at in Sillian in the morning. The German intro and weather forecast was very detailed and the guests were informed of details with a lot of graphs. The Canadian intro version was "Sunny and Hot" and watch out to not get blisters on your ass from flying too much.
With that, we headed to Monte Piano and set a task to fly from Monte Piano to the 3 Zinnen, via Cortina to Arabba and land right at the hotel Olympia. I think this is about a 40 km flight and right though the middle of the Dolomite's. The conditions started weak and with a lot of east wind. 2 hours later, the thermals got stronger and blocked the wind. After launch, there were some nice, but not strong enough thermals to get over to the 3 Zinnen. Being patient, and on my second attempt to cross over, I reached the 3 Zinnen at half the summit height. To get higher, you needed to scratch close into the towers of the 3 Zinnen and I have to say it was very spectacular watching the rock climbers on the walls and slowly "thermalling" to pass them on the wall, and eventually reach the summits of the the "the 3 summits". Once I was about 300 meters over the summit, I headed south and fueled up more height over various exposed summits before crossing over to Mount Christallo. Mount Christallo worked very well and at 3300 meters I crossed over Cortina and scratched along the west side of Cortina but barely crossed a low ridge over to the foot of theTofane. I was very low and was close to landing at the gravel field below the massive 1100 meter rock face of the Tofane and literly at my landing approach my vario started to beep and I could do one figure eight along the gravel, gaining about 20 meters. From then on I kept scratching and slowly worked myself up this massive and never ending wall right to the summit. I have to say that this was my most rewarding flight I have ever done. Just amazing to soar so close in absolute gentle lift up to the summit along such a massive rock face. Once I got about 300 meters above the summit things got a bit rough with the east wind kicking in, but I continued my flight to Arabba and landed right at the hotel. After I landed, Frank called me on the radio to say he already had a couple beers ordered. He had the same experience as I had on the Tofane and agreed that this was the absolute highlight. The only part Frank missed was the 3 Zinnen as he was to eager to get the beer first. The rest of the group landed either at the regular landing site and 3 others landed in Cortina. Our 2 non-pilots had a great day hiking around the 3 Zinnen and Kari discovered the mountain named after her family name "Paterno". Very cool as well. 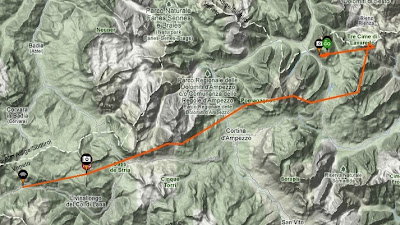 Day 7:
Sunny and hot. So we headed to Col Rodella and after watching some crazy take offs on the east side we started flying later on the SW side of the mountain. The conditions were superb and I had an amazing flight over the Lang Kofel, the Sella, the Marmolada, again along the Sella to the east and back to Arabba to the hotel again. Everyone had great and safe flights and the non-pilots were hiking on top of the Col Rodello.


Day 8:
Sunny and hot again. The thermals were a bit weaker, but we flew the same route as the previous day. Our 2 non Pilots did a great hike from the top of Sass Pordoi.


Day 9:
Sunny and hot again. This time we decided to take the Gondola up to the Sass Pordoi to enjoy an amazing view of the Dolomite's. After that we headed to Col Rodella again and once again we flew all over the place, including the Marmolada. Our 2 non-pilots headed for an overnight trip to Venice and had an amazing time.


Day 10:
Guess what.... yes, Suny and hot again. This time we parked on top of the Passo Pordoi and hiked for about 45 minutes to the Belvedere. Most people flew to the landing site and then up again to the Col Rodella for further flights. I launched later from Belvedere and did my usual round over the Marmolada and back to the hotel.


What an amazing week in the Dolomite's. Every day we were able to have incredible flights and flew all over the place! I even had a double bonus, as I was able to hike every morning to the Sella rock face, with Wendelin (best BlueSky guide), before we started the tour.  It was a great morning flight along the rock-face and we landed right at the hotel. The pictures below will tell more than my words.


Day 12:
Back in Germany and the weather was sunny and hot. We visited the "Free Flight" at Tegelberg. The "Free Flight" was not as good as we hoped for and a lot of manufactures did not attend. We still had a great time getting a couple more flights in, and enjoyed the beer tent. One thing I was very impressed with at the show was the Atos with all the different motorized versions. 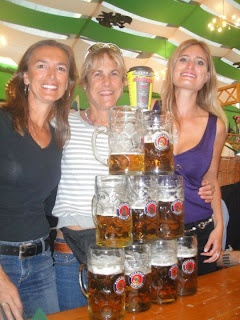 Day 13:
Some morning flights from Buchenberg and then on our way to the Oktoberfest in Munich. The Oktoberfest is so huge and the grounds are massive. It was wild how many people were there, but we only managed to see the first 50 meters of the grounds as we got sidetracked with the partying and dancing in the Paulaner Beer tent.

Day 14:
Sunny and hot and lots of traffic to the Munich airport.
Wow what a couple of weeks this was. Simply amazing and almost unreal for both pilots and non pilots. I think we will offer a package like that for next year again. Let us know who might be interested to join us next year.
Posted by Max Fanderl at 12:01 PM No comments:

Flying over the castles and the Dolomite's Tour - part 1

This years "Flying over the castles and the Dolomite's" tour needs to be written up in 2 parts as there was so much happening and too much to write in one blog. Although, I could just do a very short version and simply say .... awesome, awesome, awesome, flying every day!! The only hard part was the blisters we got on our behind from flying too much.

Here is how it started:
Day 1:
I picked up Frank, Tracye, Mike, Dave, Chris and Karie at the airport in Munich. First we headed to Kempten to have coffee and Oma's homemade Zwetschgen Datscahi with my Mom and Dad.
The weather was sunny and hot and we still had enough time to head to Tegelberg to fly over the Schloss Neuschwanstein. Everyone had a great flight and I did a tandem with Erik.
Tracye, Karie and Katia had a nice walk and found a hidden hut where we ended up for a beer after the flight.


Day 2:
Winds were light and forecast was sunny & hot again. This time we headed to Breitenberg. Conditions were light but a couple of us managed to get up below cloud base over Ruine Eisenberg and flew down the ridge towards Fuessen and back crossing the valley across Pfronten and back to the landing site.
On the way to the Schloss Neuschwanstein to drop off Chris, Karie, Tracey and Dave for their castle tour, we stopped at a BBQ chicken and haxen trailer. We had spare rips and "Schweins Haxen". Man that was good and a lot of food. After we dropped them off at the castle, Frank, Mike and I headed to Tegelberg for another flight. Mike and I hiked up via the "Gelbe Wand" which was not a good idea with a very full stomach. The flight was great and rewarding and we all met down at the hut for beer again.
Penny was flying with us at Breitenberg, but had to head home to get the kids from school. Thanks for the train network here in Europe, Penny could walk from the landing site to the train station to get back to Kempten.

Day 3:
The forecast was sunny and hot with a low cloud base in Germany, so we drove 25 minutes to Hahnenkamm by Reutte. The thermals started week, but we got some great flights right (up to 2.5 hours) right to cloud base and into the Tanheimmer tal and back. After some good bratwurst, beer and schnaps we headed to the Neunerkoepfle im Tanheimer tal. The gondala was already clsoed and we headed via the Oberjoch pass to Sonthofen for Coffee and beer. After this we picked up Penny from Kempten and drove to the Sudhaus for dinner. The Sudhaus is a micro brewery with a rustic restaurant for local food. The evening went from a dinner to a singing party with another group. Too bad I did not video the songs everyone was singing.

Day 4:
All of us, as well as the  kids, started the day with a visit the Viehscheid in Heubach.

After the Viehscheid we drove to Neunerkoepfle for another great flight. There were a lot of pilots and almost  too busy, but the conditions were great and I did a 1.5 hour tandem with Katia.
After the flying, I dropped off the group in Fuessen where they had a great italian Dinner an we headed back to Kempten.

Day 5:
There was a concert with 100 Alphorn's on top of Breitenberg. After the concert I did a 1 hour tandem with Erik over Ruine Eisenberg and another tandem with Katia. The conditions were way better then we anticipated.
See the video Mike did of the Alphorns.

Later this afternoon we drove 3.5 hours to Sillian to get ready for the Dolomite tour.
Part 2 of the blog will be about the Dolomite's