The 34th annual LakesideEvent.com splash down was simply said amazing and magical. Friday we had huge thunderstorms and the weather forecast for Saturday was so so.
Saturday morning the valley was covered by fog and low clouds. We had 15 Hang glider pilots and 30 Paraglider pilots show up at the 8:30 am morning briefing. Once we got up to the launch (around 10:00 am) the south wind already picked up and the clouds and fog was breaking. See some pictures from Stewart's Photo Album. 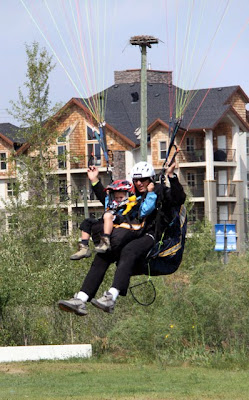 Eventually the south wind got to strong for paragliding and only hang gliders where in the air. We had a lot of spectators on the beach and even Brewster come down with a full busload of spectator. While hang gliders where flying we did a ground-handling demonstration. One with a modern serial class wing and I had the opportunity to play with a 1989 Birdwing (I flew this kind back then). What an experience for me and spectators could see colored wings and activity. I think I even saw Jeff starting a hula-hop competition. Then just as asked for, the wind died down and we could start flying again.The wind shifted from south to north and eventually got to strong to land at the Lakeside Pub (around 5:30 pm). Everybody could get their flights in and some could log up to 4 flights. I did 3 tandems, one with my son Erik and his teddy, the second with the Columbia Valley Pioneer reporter Kate and the last one with Penny's sister's son Declan. Katia (my daughter) did not feel to good to go flying and the wind got kind of to strong anyways, so she enjoyed the beach and the many other kids to play with. 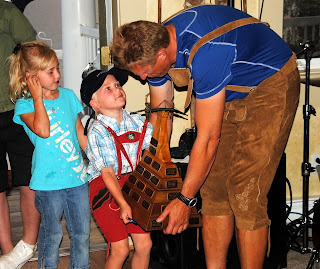 The www.LakesideEvent.com is not a hardcore flying meet where pilots fly long distances. This meet is more to show all the non-fliers what we have fun with and to raise interest in our sport. This event is also a social event for all the pilots, friends and families to get together to socialize and have fun. And this is exactly what we did, after the flights, everyone enjoyed the beach and then headed to the Lakeside pub for dinner. They had a great buffet ready which was leading into a fantastic party and dance with the Electric Squirrels. The Electric Squirrels are a great dancing band playing just about anything, thanks again for playing until 1:30 am.
Before I forget, during a music break we had our boat race between Hang glider pilots and paraglider pilots. This was a close race and had to be done twice. This year the paraglider pilots will be on the trophy (sponsored by CJ92). Can't wait who will be on it next year. 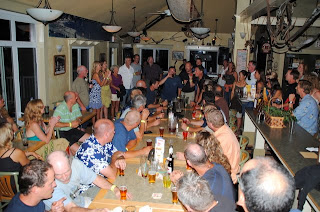 All in all it was a great event, for everyone who did not come, you missed a good one. 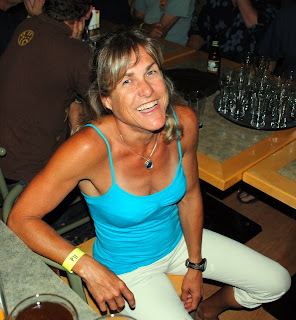 Here are a couple thank you's to make this all happen. First I like to thank Frank and Tracey to run this event and to keep everyone inspired and more so to back it financially, meaning to somehow make this work with the needed cash sponsors. Also a huge thank you to all the volunteers for their time and efforts and to the Search and Rescue group who come up from Kimberly to monitor the top of Mt. Swansea.

Posted by Max Fanderl at 8:16 AM No comments:

Flying meets in the summer

Spring and beginning of the summer was not the best for flying. We had a lot of wind or it overdeveloped very fast.
July 17th (start of the "Willi") was the first opportunity to get a bigger flight in, I called Stewart Midwinter and Ron Ford and sure enough we got a flight from Golden to Invermere (110km). It must have been at least 5 years back that I flew with Ron this flight the last time. Steward landed at the Invermere airport and got a ride back to Golden to retrieve his car. I was not able to participate in the remaining week of the Willi due work.

The following Friday evening I watched Eric Oddy from Brisco when he did his kind of training and warm up for the Rocky Mountain thermals. Check out the video, he was not able to fly the day after as planned, but he flew in the Canadian Nationals.

On the last day of the "Willi" I tried to fly from Invermere to Golden for the big dinner party, but got washed down at Edgewater (40 km from Invermere) by strong north winds. Later this evening we (the family, Frank, Dominic and Jeff) drove to Golden for the dinner. What a blast we had to meet all the old friends and the many of the new pilots. Most pilots did not fly this day as the conditions where very strong and rough. Later this evening the pilots go further challenged with Katia's hula-hoop competitions. Just great to see that kids can have a lot of fun at events like this as well.

The next day (Sunday) we got in a morning flight with Penny and a tandem with Erik. I headed up again and got another great flight from Golden to Invermere (112 km)

Monday morning Stewart and I drove up to Golden for the pilots meet. I am not really a comp kind of guy as I like more x-country flying without watching how some people act and let things get into their heads due a competition. Yes, a comp is something to take serious, but you still can have fun with it to. I had a blast at the Canadian Nationals and really enjoyed to fly with over 40 people the whole week long. The best flights/tasks where the first 2 days, one was going down to Invermere (108 km task) and the 2nd was going north to Donald Station, back to Mobily and then land at Chris Mullers old place at the Blaeberry (I think 50 km plus). The other days where some times windy or the forest fires in the province shut down the thermals. Thanks to Bruce and all his volunteers to make this such a great meet. If you like to get more details, follow this link to Nicole's blog where she posted all the results.
Another thing what stood out was the new Ozone R 10.2 glider. Man, that things is very impressive and I have to say it certainly sets a new standard in performance. Even when it got windy and more tricky to fly, these guys where still finishing tasks when most of us where not able to finish the task.
These guys certainly made me think about to get one. At the same time I wonder when this knowledge can be used in the serial wings. Right now we have great wings to thermal but as soon we need some speed, we are done. Although, it is already impressive where we are today when I think back to my first flight in 1987.

The last week I was back at work and we are just getting ready for the 34th www.LakesideEvent.com.

Hope to see many of you there.
Posted by Max Fanderl at 10:40 AM No comments: